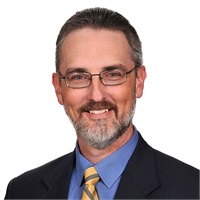 Scott joined the Stewardship Advisory Group team in May of 2005. Scott initially joined the team as the Marketing Specialist but over the years his skills in assisting and supporting our clients prompted a rise through the employee ranks. Today Scott serves as our Chief Operating Officer, doing what Scott does best, providing concierge level service to our clients as well as overall operational support for the firm.

Scott was born in Germany where his father was stationed in the Army but spent most of his life in central Indiana. An avid sportsman, Scott enjoys playing basketball, volleyball and golf and has earned his Purple Belt in American Kenpo Karate. Scott has a talent in art and attended Bob Jones University, in Greenville, SC where studied Graphic Design. Although he ultimately ended up with his Business Management degree, he still enjoys exercising his artistic muscles occasionally.

After college, Scott worked for the Walt Disney Company as an Internal Regional Consultant for Walt Disney Art Classics, which sharpened his client service skills immensely. In 2001, he joined the Christian Stewardship Association (CSA) as their Office Manager and realized God’s calling for his life in the area of helping others be good stewards. During this time, he was first introduced to Jeff Rogers and Stewardship Advisory Group during a CSA event.  In 2005, CSA moved from Indianapolis to Chicago and the Lord opened the door for him to join Stewardship Advisory Group.

Scott has earned his Series 7 Securities License and has extensive experience in dealing with a wide range of products, companies and custodians. His expertise allows him to assist clients of Stewardship Advisory Group and their advisors in navigating the ever changing landscape of paperwork and platforms necessary for establishing new accounts and supporting our clients with their service needs. Scott lives in Clermont with his wife Julie and two daughters, Hayley and Reagan.