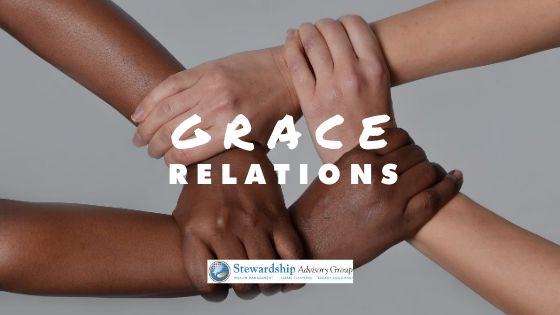 Every race on the earth will likely relate with other races at some point unless they are extremely isolated. And when our race relations are grace relations—relating to one another with the same grace we have been given—it is a beautiful thing.

“From one man he made all the nations, that they should inhabit the whole earth; and he marked out their appointed times in history and the boundaries of their lands. God did this so that they would seek him and perhaps reach out for him and find him, though he is not far from any one of us.” ­—Acts 17:26-27

There is One Race…the Human Race

Each one of us was created in God’s image—not one is better than the other, and we are called to love one another and to treat one another as better than ourselves. “If you really fulfill the royal law according to the Scripture, “You shall love your neighbor as yourself,” you are doing well. But if you show partiality, you are committing sin and are convicted by the law as transgressors” (James 2:8-9). Yet, since the first children (Cain & Abel), man has been at odds with one another. And because of the fall of man (and our sinfulness), our sin has pit brother against brother in pride, envy, covetousness, lust, violence and bloodshed.

This type of grace, forgiveness, understanding and compassion is what our world needs now. And it is also what our nation and our communities need now.  We don’t need more racial division; we need to overcome this division by the grace and the love of Jesus Christ.  I believe the most needed solution for Race Relations is grace relations through the only hope of our society—the Gospel of Jesus Christ!

The Real Crux of the Matter

The Founding Fathers of America understood that all are created equal. In the Declaration of Independence, they said “We hold these truths to be self-evident, that all men are created equal, that they are endowed by their Creator with certain unalienable Rights, that among these are Life, Liberty and the pursuit of Happiness.” Abraham Lincoln reaffirmed this when at the end of the Gettysburg Address he stated, “Four score and seven years ago our fathers brought forth on this continent, a new nation, conceived in Liberty, and dedicated to the proposition that all men are created equal.”

The Civil War, the war that tore America apart, was a war that, in the end, was fought to unite us. It was a war fought to end slavery. It was the first “Civil Rights Movement” in America. Moreover, it was fought, to a great degree, based on the founding principle that “all men are created equal”. Abraham Lincoln believed this…with conviction and with passion. And, at the end of the war, he paid the price for it with a bullet to his head at the hands of a race-hating assassin.

We can’t control what happens in Seattle, Minneapolis, Washington, D.C., or other major cities. But we can seek to lead our families well and influence others toward reconciliation. There is a great opportunity to have conversations with our children and grandchildren about the real issues, the real & present dangers facing our nation and our world. We must mentor & inspire them to be “Ambassadors of Love”, Ambassadors of Peace” and “Ambassadors of Racial Reconciliation”.

Grace Relations—The Control We Do Have

To a great degree, we can control what happens in our own home, our own family, our own church and our own community. We can be Dads & Moms, Grandfathers and Grandmothers that lead our own families well. How are you leading your family in this area of being “Ambassadors” of Love, of Peace and of Racial Reconciliation? We can’t just sit back passively and watch our nation, our communities, our culture and our families be destroyed. As Edmund Burke said, “The only thing necessary for the triumph of evil is for good men to do nothing.”

Beyond the context of leading well within our families, although we can’t control what happens in some of the major cities across America we can provide leadership and influence within our own local Community and within our own Spheres of Influence (the businesses we lead, the churches we attend, the schools our children attend, etc.).

Right here in my own town, a suburban bedroom community outside of Orlando, the Black Lives Matters, Antifa and other groups were planning a “protest” like they did in many communities across the nation. There was a lot of concern that roads would be blocked, bricks would be thrown and that this could turn into a riot. There were a lot of emotions and concerns, even fears by many in the community. However, a group of leaders within our community decided  “Not here; not in our community, not on our watch”. They decided to hold a truly “Peaceful Protest” a day or two prior to what could have become a Non-Peaceful “Protest”.

Some of the leading pastors in our community (including my pastor) inspired their congregations, business leaders rallied around the issue and led within their influence, local political leaders (including a friend of mine who is a County Commissioner) and our local Police Chief (who is African American and a wonderful Brother in Christ) and Sheriff all led prior to the Peaceful Protest and many of them spoke on the issues of Racial Reconciliation and how we, as a community can face the realities, address the issues and work together toward healing old wounds.

Violence was avoided, the community was brought together (instead of divided) and race relations were improved and reconciliation is occurring; all because business leaders, church leaders, government and law enforcement leaders decided to be proactive in leading well and using their platforms of influence.

We can’t control what happens in Seattle, Minneapolis or other cities, but to a great degree we can lead well within our own home, our own community and our own spheres of influence.  Will you be that “Difference Maker” in your home, your family, your community and your Spheres of Influence?

Denzel Washington (Award-Winning African American Actor, Producer and Director & recipient of 2 Golden Globes, 1 Tony award and 2 Academy Awards) has said, “It starts in the home. If the father is not in the home, the boy will find a father in the streets. I saw it in my generation and every generation before me, and every one since.”

If we were to live by the Golden Rule principle, racism would be dealt a huge death blow. The real problem is not skin color, but sinful attitudes and actions. And we can overcome that sin by the grace of God and by extending grace to one another. “Grace Relations” will lead to better “Race Relations”! As we keep the conversation going and continue to work toward reconciliation, below are some more statistics and voices to consider.

“965 people were shot by cops last year and killed. 4% of them were white cops shooting unarmed blacks. In Chicago 2011, 21 people were shot and killed by cops. And in 2015 there were 7. In Chicago, which is 1/3 black, 1/3 white and 1/3 Hispanic, 70% of the homicides are black on black. About 40 per month, almost 500 in the last year in Chicago, and 75% of them are unsolved. Where is the Black Lives Matter on that? The idea that a racist white cop shooting unarmed black people is bs.” —Larry Elder, Radio Host

“The American people, we the people are not each other’s enemies. And the enemies are those people behind the curtain pulling every string, driving a wedge in every place that they possibly can. Be it race, be it gender, be it age, be it income. Doesn’t matter. If you can keep everybody divided and at each other’s throats and you can throw them off the real issues, then they won’t even noticed that the government is insinuating itself into every part of their life and gradually changing America into something that we don’t want it to be.” —Dr. Ben Carson.

Previously, Carson became the Director of Pediatric Neurosurgery at the Johns Hopkins Children’s Center in 1984 at age 33. Moreover, he was the youngest chief of pediatric neurosurgery in the United States. Carson’s achievements include performing the only successful separation of conjoined twins joined at the back of the head. He performed the first successful neurosurgical procedure on a fetus inside the womb.

Grace Relations—Choosing What Matters Most

One of the principles of leadership, whether in business, education, the church or in our homes and communities is to focus on 2 things:

Obviously, what’s happening in America—whether it’s Racial Division, Violence & Looting in our Streets, Attacks on Law Enforcement Officers, etc. (and the generally spewing of hatred & division)—are things that all matter…a lot! We as leaders need to be intentional to serve as Ambassadors of Peace and Reconciliation. It matters! Our grace relations can change the culture around us.

Second, we need to focus on the things we can Control (not the things we can’t). To a great degree, that means starting close to home, in our proverbial “Jerusalem”. Grace relations can impact our homes, our families, our businesses, schools & our communities. In short, I call these our “Spheres of Influence”.  How are you leading in these areas that are so crucial to the future of our nation and our society within the context of your own Spheres of Influence? How can you (and I) be the “Difference Makers” within our Spheres of Influence? I believe that if we do our part (control and influence the things that we can influence) we can trust God to do His part. He is in control of everything else that seems to be out of control…but isn’t!).

2 Chronicles 7:14 says “If my people, who are called by my name, will humble themselves and pray and seek my face and turn from their wicked ways, then I will hear from heaven, and I will forgive their sin and will heal their land.” Will you join me in praying for a Spiritual, Moral, Political and Economic revival throughout our land? Aand most importantly, Spiritual!? Pray hard…lead well! Be an Ambassador of Peace & Reconciliation!