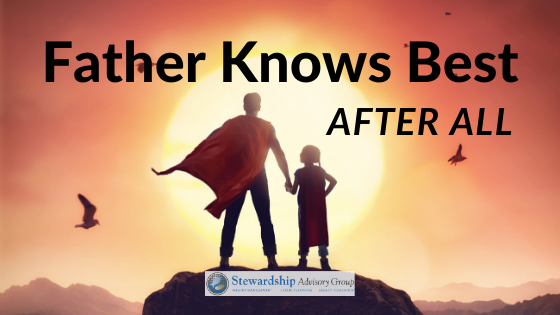 Father Knows Best After All

Dads can get a bad rap for always being the one to have to say no, whether it was for a purchase being considered or for a privilege. Do phrases like, "You're such a tightwad!" or "All you care about is money!" ring a bell?

Sadly, it is often not until children have grown up that they realize WHY Dad said no. We thought it would be great to honor Dad with a list of reasons why Dad said no to that great new "thingamajig" that was wanted.

Dads, we hope you will be amused and honored with this post. Well done for being a good and faithful steward! So, without further ado, here are the top 5 reasons Dad said no.

God made Dads logical. Sometimes Dads say no because your request was not wise or didn't make sense. Saying yes could potentially be bad for you. They think through requests and make sure they are wise. Children often want instant gratification and don't have a long-range vision. Or maybe children have not earned what they are requesting. They don't have the freedom to make the request because of poor behavior or not fulfilling their responsibilities.

Because Dad was concerned about your well-being, he always wanted to make the best decision on your behalf. The sleepover you could not go to or the beach week trip that you couldn't go on? Dad wasn't trying to be a spoilsport, but a protector. He wanted to keep you safe.

God's boundaries for us lie in pleasant places. And so Dads have boundaries that are for the good of their children, too. Limits bring freedom and protection—a covering. To give in to requests that are not wise goes against the instinct of a parent who wants to shepherd his child well. Maybe there is sin that has blocked blessing or children are out of alignment with God's will. Boundaries are an invitation to be right with God and in a good relationship with parents.

Simply put, Dad has to oversee the family budget, not just one person's desires. Sometimes the budget did not have sufficient funds because other things had to take precedence. This did not mean your request did not matter. It might have been a case of poor planning or failure to see consequences of spending and having a vision for the future. And sometimes Dad made a way, anyway.

Dads are charged by God to shepherd the hearts of their children and to train them up in the way they are supposed to go. Even seemingly small decisions can be weighty. But when they faithfully steward what God has given, they and their families will be blessed.

Below are some resources to lighten your day. Happy Father's Day from Stewardship Advisory Group!

Yours for Wise Stewardship,

12 Things Dad Taught Us About Money

Teaching Your Kids About Money

How Fathers Can Make Sure Their Families are Financially Protected

4 Things Dads Should Teach Their Kids About Money